An Interview with Ponyboy: Respect 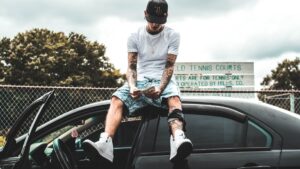 I will be honest, I don’t have an endless supply of insight to give you fathers out there who have a older boy. My oldest is 6, and I have all girls. I haven’t read to0 many books on raising boys (though realizing my deficit, I will soon). What I do have, however, is some first hand experience delving into the lives of some young men (ages 11-18) with what many would call “rough backgrounds” during my time counseling at a residential center. There were to programs for the residents, behavior modification and juvenile sexual offense. Both groups were a challenge to work with, but I can honestly say that I got a good look at the heartbeat of many a young man. I hope to share some of this experience with you now, and possibly more in the future. I am not sure how relevant the information will be to each father, but I will do my best to reflect on my experiences, and hope that there may be some useful takeaway for yourself.

First of all, I haven’t actually had an interview with Ponyboy. For those of you that don’t know who Ponyboy is, I will give a brief summary. Ponyboy is a fictional character from the book “The Outsiders” written by S.E. Hinton. There’s a movie out there as well if you are interested in checking it out. Ponyboy is a member of a working class gang, the “greasers,” that rivals a local upper-class gang, “the Socs.” Ponyboy shares his experience of gang activity and a lifestyle that I am assuming may be foreign to some of the followers of this blog. The book is a rough outlook on young men who grew up without strong male leadership in their lives. When I would sit with my clients at the residential center, it always felt like I was talking to Ponyboy. Just as the book had a lot to say about boys who have been failed by their fathers and the community around them, the boys that I sat with day in and day out had the same messages about what they needed from their caregivers. One of the most prevalent needs that I discussed with clients concerned respect.

It didn’t take long working with the boys before I got tired of hearing the phrase, “you got to give respect to get respect.” No matter how well I would try to care for my client, it didn’t seem to change anything, at least not right away. Other staff working with these youth sum the issue down to a challenge of authority, which it was, but I also saw the same attitude toward peers as well. I noticed that “respect” was like a form of currency to the guys. It was clear through the behaviors that the young men showed that they had a poor view of what respect truly meant, but it was just as clear that they were looking for something. When I asked my clients what they meant when they said that they wanted respect, most didn’t know what to say. Most of the boys could tell you what kind of person did not deserve respect. They often shared that they couldn’t respect someone that held his authority over them like a dictator. Some said that they couldn’t stand when some one had expectations of them that they were not holding themselves to. A few guys would talk about “clout.” “Clout,” according to the Urban Dictionary means- to have money, power, and/or influence. The more money, power, and influence you had, the more respect you deserved. These were the top three responses that I would get.

As I think about the first response- being respectful is not being a dictator, I am drawn to a few conclusions. One, we as adults can show respect to young men by loosening the reigns a little. Barking out orders all the time can lead to our teenage boy developing a deaf ear to what we have to say. I do want to add that being a pushover was just as dangerous as being a dictator. The guys would walk all over the staff that came in with the attitude, “I just want to be your buddy.” I felt sorry for those staff members, they often quit their jobs shortly after the realization that the path they were going down was a one way street. The leaders that the boys truly respected were the ones that balanced a firm hand with a flexible mindset. I saw the best relationship with staff from those that were patient, clear with expectations, and willing to negotiate (within reason). I can tell you from experience that finding the balance is an ongoing struggle, as every situation is different and requires our best. The staff that I had come to trust the opinions of most would often say, “start out rigid, and ease up with time.” I think the wisest of us dad’s are the ones who have mastered the art of knowing when the shift should start.

The second response, don’t be  a hypocrite, probably doesn’t take a lot of explanation in order to understand why it would affect a boy’s respect toward someone. Who wants to respect someone that doesn’t practice what they preach? Not I. When I look to a leader, I want to see someone that matches words with actions. That’s not to say that there is no room for error. Every authority figure, no matter how intentional, will let a young man down. They are going to let you down as well. These are the times when forgiveness and apologies come in play. When we, as the leaders, mess up we need to fess up. Boys need to know that when we get off track we intend to get back on (all while willingly seeking to fix any damage caused by our actions). When they are in the wrong, they need us to be both rational and empathetic in our response. Young men will shutdown when they feel they are being held to a standard that is not being shown. They will also shutdown when they believe that the standard is unobtainable.

The third response to my respect inquiry, have clout, takes a little digesting to fully understand. We don’t often say that respect should be given to people solely for having influence, money, or power. We would like to think that we can see past the flashy watches, push-to-start ignitions, and gold teeth that these “wannabe gangsters” coveted. Yet, think about it. If I were to introduce you to Bill Gates, would you not immediately start putting your best foot forward? I know I would. Bill Gates, by nature of his achievements, earnings, and influence has made for himself a position that demands respect. Young men respect those that they can aspire to be like. They reserve a special place in their heart for someone that has demonstrated the ability to attain that which they value. Where do these values come from? When they don’t have a good role model in your life, it comes from friends, culture, and peers. When we don’t model good values, our boys will develop respect for people that do not truly deserve respect.

Respect is a complicated thing. I imagine that you can see this now. If we are to gain the respect of our teenage boys, if my experience has provided some sound guidance, then we can do so by: 1) balancing firmness with flexibility; 2) demonstrating what we expect from our teen; and 3) being someone that they can look up to. I imagine that if Ponyboy had a father that did these three things, the narrative of the “Outsiders” would have looked a lot differently. I think the stories I would have heard from my clients would have been different too. That is my hope for your relationship with your teenage boy or for the ones that you can have a positive influence on around you.