From the Heart Series: Lost 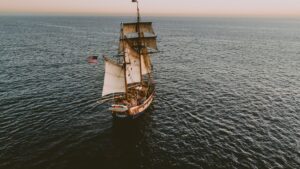 Growing up in a military home, my understanding of a man went a little like this: a man is someone who always makes the right decisions; has the respect of everyone he knows; can weather any storm; never grows tired or weary, and is without any flaw. That’s the message that you get when you want so desperately to be like a man that you don’t know very well. As a result, I found myself needing to be pristine in every way. I strived hard to do everything with excellence. Often, people who knew me would say, “You’re being too hard on yourself.” But there was something deep inside me that told me I needed to think wiser, hit harder, and run faster than I ever could achieve. Being a man meant that I needed to be perfect. Being a man was to walk proudly with other men, as one of their equals. It also meant that I needed to pursue what the world thought I should pursue, and value what the world thought I should value. Even now, there is a cruel, merciless voice that calls out to me each day. It says, “You will never be enough.” It’s like being lost at sea and never being able to find my way home.

It took me a long time to hit my growth spurt. In fact, when I ended my junior year in high school, I was 4’7″ and weighed 75 lbs. I started my senior year in high school at 6’0″ and 145 lbs. True story. It really hurt. I spent most of my time as a scrawny kid that sounded just like a young girl. I must have had some hand gestures or something that threw people off because most people thought that I was homosexual. I remember asking some girls out in school and getting some very confused looks from them, followed by the same phrase each time- “I thought you were gay.” It didn’t help at all that I am a feeler more than a thinker. With such a rigid view of what manhood looked like, coupled with the fact that I was nowhere near the image that I had for myself, I fell deeply into shame. I wanted to be respected by my male peers. Yet, I did not fit well into the world of men. I did, however, connect well with females. In fact, many of my friends growing up were females. I was surrounded by femininity all the time. I guess not much has changed.

To be honest, I have found freedom in the work that I do now. Except for my boss, I am the only male figure in the building most of the time. At home, I live with five women, so I don’t have a lot of competition there either. It has given me, not only the freedom to be myself but to also see my own manhood in a vacuum. Through my experience, I have been able to ask what my own manhood looks like, manhood that is not tainted by the views of others. Sure, I love my guy flicks. I love to take on difficult challenges. I crave mastery in everything that I do. But, these are things that true of me, they aren’t what people told me I should be. I wish every man had the opportunity to see a clear picture of their own manhood. What if every man could see themselves through their own eyes and be the captain of their own vessel?

It’s surprising how easy it is for me to go back to a feeling of shame when I am around what is considered more “manly” of men. Even if I believe the guys I am around are complete dirt bags, I still keep measuring myself up to them and finding myself falling short. What really makes me a man? I have a longing inside to be respected, even by those that don’t deserve my respect. What drives me to want to be someone that I am not? Can I be true to myself and still be a man? These are the questions I keep asking myself. Round and round I go, down an abyssal pit of hopelessness. But, do I really need to feel this way? See, here’s the thing- I care for my wife and three girls well; my team at work trusts and respects me; I am willing to stand up for what I believe in; I show up, I stay strong, I take initiative; I’m willing to put in the hard work to make a life for myself and my family, I seek to honor God in all that I do. What part of manhood am I missing? Where is this shame coming from?

If you are like me; if you have found yourself running on a hamster wheel trying to live up to unrealistic, unhealthy standards then let me share some encouragement with you. Manhood is not about how much you can bench press, how fast your car drives, how much money you make, or how many women you have slept with. Manhood is about doing what’s right, even if it costs you everything. Manhood is about staying true to what you believe in. Manhood is about living a life of honor, integrity, and virtue. Manhood is about putting your priorities before your pleasures. Manhood is to be true to your word. Manhood is about caring for your fellow man. Manhood is (in my humble opinion) about living in step, through faith, with our Heavenly Father. Everything else doesn’t really matter. It’s so easy to get lost in this world as a man. I desire that this message for the week might be a lighthouse to guide you back. As one of my favorite movies, The Patriot, said, “Stay the course.”