It’s All In How You Look At It 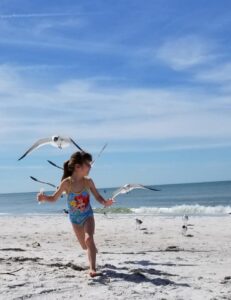 To be honest, I have been experiencing a “writer’s block” since I have been back from the vacation to Florida. The ladies at Heartline have encouraged me to write about the Florida trip since there were many interesting moments. I am torn about what the message is in sharing the experience. Either I am sharing with you reasons why you should not try to travel with young children or this post is about keeping a good attitude under stressful situations. Take from this what you will.

I would say that the trip “experience” actually started before we even took one step out the door. In fact, the mood of the trip began, for me, when my wife told me that she had chosen to not pay for luggage so that we could save $65 by taking carry-on’s instead (as well as a stroller and three car seats). Tip for you here- don’t do that! Through most of our time in the airport, I was carrying 2-3 car seats, my bookbag, and at least one other bookbag belonging to one of the girls (and, on the rare occasion, one of the girls). The girls would last about 10 minutes before they were fussing about being “too tired.” By the end of the time, I would have gladly paid $65 to use all those luggage bags with WHEELS that we had bought a few years ago. On the bright side, we made it through the process of getting checked in and on the plane with little hiccups.

Once we were on the plane, we discovered that my family and I would be separated by at least 8 rows. All of the toys and snacks were with my wife. I was designated to have Josie (our youngest) sitting on my lap. Josie was angry throughout most of the trip. The flight attendants did not offer any assistance. My wife was unaware of the challenges that I was facing, because she was too far away to hear Josie screaming. I was sitting closest to the window and the guys in the row with me did not let me out. Ironically, the guy sitting next to me and my screaming child kept his eyes closed and gave every indication that he was trying to take a  nap. I did all that I could not to let the situation make me upset. Josie had become so angry that she was scratching and biting me. She tore into my skin so much that I actually have a scar on the back of my hand. I told the ladies that I was keeping a list of this kind of stuff so that, when Josie turns 16 and starts asking for a car, I can pull the list out and say, “Nope, and here’s why…”

Once we got off the plane, the trip picked up. Waiting to get a rental car was a long process, but the girls kept up good attitudes, and we were all happy to be off the plane. When we got to the apartment that we would be staying at, it turned out to be pretty homey. The weather was a little cooler than I had anticipated. We had our honeymoon in Cancun during the winter, so I was expecting similar weather. I had packed one hoodie for the trip and found myself wearing it the entire time. To be honest, I was very confused about being in Florida. I have been all over Central America, and the tropical environment felt similar to what I had seen there. However, it took me about half the trip to get over the idea that we were surrounded by Wal-Marts, McDonald’s, and people that spoke English. I had to play Spanish music in the car so that I didn’t succumb to a complete culture shock. I imagine that sounds weird, but that took some adjusting to.

On our first full day, we went to the beach with some friends of the family. I am not a big fan of beaches. I like my water much warmer than the ocean ever is. Sitting in the sand for hours gets boring quickly. We did have fun looking for sea shells. I also had fun watching the girls try to keep their food away from some very bold seagulls. I have never seen seagulls get that aggressive before!!! We have this really cool picture of Aurora (my oldest) running toward the camera with seagulls chasing behind her. It looks like the cover of a “The Birds” movie remake. The girls had a lot of fun. As I had suspecting, much of the trip was about the girls making memories. When you have young kids, trips do feel like they are more for them than they are for you. That’s something that you have to embrace.

Getting some sun really helped my mood. I have seasonal depression. It felt so good to have the weight off my shoulders for a few days. I had anticipated that I would get some work done while I was there. It didn’t happen. I don’t have any regrets over that, even though I still feel like I am trying to play catch up. There were a few times that my wife took the girls out so that I could get some introverted rest at the apartment. I am ashamed to say how much I appreciated those times. I feel like we had good balance between doing activities in public and spending time as a family together.

Some of you might not know this, but my mother-in-law lives with us. She had my wife late in her life, and is at a point where being with family is important to her well being. She has a great heart, but she can do some frustrating and scary things sometimes. There were a few times at the beach and at an aquatic museum that she would leave without telling us where she was going, sometimes taking a kid with her, and then would show up twenty or thirty minutes later. It happened so often that we felt like we were keeping an eye on her as much as we were on the children. I know that sounds condescending, but that was a true concern for us.

During our time there, we got to hang out with some friends that moved from Warsaw to Florida a few years ago. It was good to see them. It always amazes me how fast it can be to pick back up with good friends. In just a few minutes, we were already laughing and enjoying the moment together. My friend Daniel and I played some video games with his oldest son. It was cool to see how much Daniel’s son admired him. They were thick as thieves. Daniel and his son were a blast to hang out with. This was, without question, my favorite part of the trip.

Toward the end of our trip, we walked past some souvenir shops. The girls had been spoiled like crazy during the trip, but grandma hadn’t really had gotten much from the time, except for the ability to pick what show we watched after the children went “to bed.” I use the term “to bed” loosely, because they would stay up hours goofing off each night. No matter how much you want them to sleep when they are supposed to, there are only a few legal ways to get a child to sleep against their will. We were too tired ourselves to consider any of them. Anyways, when we were at the souvenir shop, I decided to get grandma a jacket. I share this story with you, because I was impressed with how meaningful of a gesture it was for her. She wore that jacket for the rest of the trip. If I go home right now, I am pretty sure that I will catch her wearing that jacket. It means a lot to her. I think it’s easy to miss out on such simple ways to tell others that you love them.

On our way back from the trip, we had our fill of adventure, but the fun was just starting. While we were walking the terminal to eventually get back to our van and go home, we had to use some escalators. Another tip- escalators and young children don’t mix. The first time that we used the escalator, Nadia (my middle child) freaked herself out and fell backwards on her way up. Thankfully, I was right behind her to catch her. I had my hands full, because I was, at the time carrying way more than my share of stuff on my person. I did the best to keep her propped up and hoped that my wife would help us out once we approached the top. Like everything else, it all turned out right in the end. As we were going up, there were many ladies screaming at me, “Help her! Get Her!” like I wasn’t doing the very best I could in a tough situation. I did not feel like the world’s greatest dad that hour.

The next time that we used an escalator, I held Nadia’s hand (along with everything else). Before we made it to the end, I heard my wife call out, “Watch her jacket, she’s leaning against the side and it might get caught.” Before I had time to figure out which of our three children she was referring to, Nadia’s jacket had been snagged. Not only was it snagged and pulling on her, but the jacket had been tied to her body! We had to scramble to free the jacket from her before it caused her serious harm. Thankfully there was an attendant nearby who pushed the emergency button as I used the last split seconds to clear her body of the now tightening grasp of the stairs as they went underneath the floor. She was unharmed- but we used the elevator for the remainder of the time.

Our trip from the Chicago airport back to the house was supposed to take two and a half hours. Due to Chicago traffic, it ended taking almost five. It didn’t bother me too much. I was just glad to be pointing the nose of that van toward home. By that time, I was okay with every bathroom break, every fussy child in the back, every snarky remark made by a tired grandma. We had been through so many trials, I felt that I could take on anything, especially knowing the end was in sight. We made it home late in the night. My wife did all that we could to prepare for work the next day. Tip #3- don’t go to work the day after your trip; you need time to recover. The next day, people asked me how the trip went. I told them that, in all honesty, it was a disaster. But, I thought more on it, and I concluded that- maybe these are the best kinds of trips. By the time we were done, my normal, everyday life felt like the real treat. I was glad to be back. In time, all of these crazy experiences that we had will be good memories. I think that’s how you get through the crazy.

That was the highlights of the Florida trip. I know I speak for everyone when I say that it would be fun to hear about some of your experiences going on trips.