On the Same Page 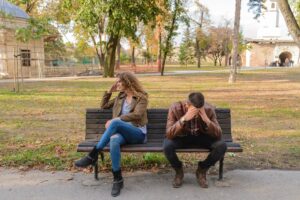 There is a scene from the movie “We Were Soldiers” that I believe reflects the relationship that many husbands have with their wives. The scene goes something like this: The LZ (landing zone) becomes overwhelmed after North Vietnamese troops surround Lieutenant General Hal Moore and most of his battalion where they have set up base camp. This leaves Moore without needed reinforcements. After a large scale North Vietnamese offense is called on the base camp, LTG. Moore is forced to call in “Broken Arrow.” This means air assistance is needed to assault the enemy force close to where his own men are struggling to hold their position. During the attempt to repel the enemy soldiers, there is an incident in communication leading to an American aircraft dropping napalm bombs onto their own troops. Obviously, once the mistake was realized, corrections were made, but the loss of American ground troops was catastrophic.

So, what does this have to do with relationships? In my experience working with couples, as I listened to the partners share their concerns and hurts, I would often think to myself, “I don’t think these two realize that they are on the same side.” When there are some breakdowns in communication, we start experiencing casualties and loss. Far too often, we develop feelings of bitterness and resentment toward our ally, our partner, and start attacking them. It is during these times that I get the picture of Moore and wonder what would have been rolling through his mind if he hadn’t viewed the bombing as an unintentional error. He might have said things like, “my own allies did this?,” “why would they want to hurt me like this,” and maybe, “they won’t do this to me again, I’ll make sure of it.” That is where our pain takes us when we start viewing our partner as the enemy.
If we are going to work with our partner to love and discipline our children, we can’t treat them like enemies that we are living with. When I would counsel couples and realized that the “enemy mentality” had settled in their hearts, I would share with them a challenge. If you have ever found yourself treating your partner as an enemy, I give this challenge to you now. Before engaging in any conversation with your partner, pause and say this phrase to yourself in your head, “she is not my enemy, she is my ally.” The conversation should be framed in a way that reflects this statement. If you start feeling heated halfway through, go back to this statement. You may have to gently remind your partner that you’re not the enemy too from time to time. This might sound too simple to have any meaningful effect, but give it a try and see how much different your conversations go. If you can keep this thought in mind, you will be surprised how much easier it becomes to find common ground and to support the decisions of one another.
Once the enemy mentality no longer dictates conversation, then it is time to start taking ground together. Discuss everything. As long as you and your partner remain a team, then talk about the details of life: chores, responsibilities, parenting styles, traditions, money, plans, faith, fears, dreams, you name it. These topics only become barriers when we treat our partner like they are against us, that they do not want what is best for us. If you feel hurt, give your partner the benefit of the doubt. Ask questions to try to figure out where a breakdown in communication may have taken place. If hurt was intentionally caused, then apologize to each other and take steps to make sure the incident doesn’t happen again. Learn from past mistakes and be willing to compromise. Use a tone of voice and body language that reflects love and not judgement.
These are some ways that you can work with your partner instead of against her. As the old saying goes, “behind every great man, there is a great woman.” This means that if we are to do great things, we are going to need the support of our partner. Rock Solid men are strong because they remain united with there allies. Always remember, your partner is not your enemy, she is your ally.