The Master and the Apprentice 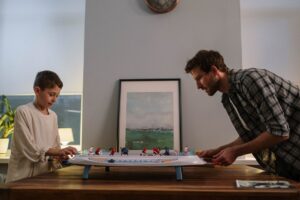 “Can I ask you a question? Why did you pick me?” That’s what was running through the inquisitive mind of a young man as we made our way back to his house one evening. After a little time for reflection, I shared with him a longing desire to have someone share their time, attention, and wisdom with me. I had been on my own journey, looking for a mentor. When I realized that men of this generation just don’t seem to care about mentoring anymore, I decided that I would work toward being the change that I wanted to see in the world. I found a 10-year-old kid in my church, someone that I knew very little about, and I said, “Hey, how would you like to be mentored by me?” The rest is history. It was one of the biggest steps of faith I have ever made. After he heard my reply, the young man said, “I can’t tell you how much I appreciate you taking time out of your week and hanging out with me. People have told me that I have grown up a lot over the last couple of years. I think that’s because you have taught me how to be a better person. You are one of the best friends I have ever had. You are always there for me and you never ask for anything in return. Thank you.”

Sometimes, I feel like I am pulling from the deepest corners of space to find something to write for the blog. Other times, the next blog post idea is as obvious as that massive guy that always seems to sit right in front of you at the movie theater. This week I am having an experience more like the latter. The obvious theme for this week has been the concept of mentorship. It’s not something we often think about as “dad-craft,” especially when we are early on in our own fatherhood experience. However, it has long been understood by the wise that passing the knowledge you have gained to the next generation not only benefits the apprentice, but also the master. In fact, after having mentored a young teen going on three years now, I can attest to this truth. This week I want to share with you some of the lessons that I have learned through my time as a mentor. By doing so, it is my aim to encourage any fathers that are not currently mentors to take that step of faith and to provide some comradery with those that are already in the trenches.

I want to start right off by saying that being a mentor can be a thankless job sometimes. That conversation that I shared above- that happened just a few months ago. We have been meeting together for three years! I have spent many weeks wondering if I am just spinning my wheels. Like the time when I found out this little buddy of mine had been struggling with depression for almost a month, and he had decided to tell everyone in the phone book before he came to me. Ouch! Or there was this other time that I sat in an audience as he gave a public acknowledgment of all the influential people in his life. Guess who didn’t make the list? Double ouch! That’s part of being a mentor. I have had to learn that it isn’t about recognition and it isn’t about feeding your ego. You have to keep pushing forward, even when the going gets tough. You have to keep leaning on faith when you can’t see the fruits of your labors. This is one of the reasons that being a mentor strengthens you just as much, or possibly even more than the person you are pouring into.

When I asked this young man if he would like to be mentored, neither one of us knew what that would mean. I knew that I wanted to extend my home out to someone that wasn’t flesh and blood. He knew that he was going to be spending time with someone that wanted to spend time with him. That’s where we started. From there, I often felt that I needed to be some wise sage that always had the best answers for every question or problem that came along. I would often try to control the environment when I would bring him to the house, that way he wouldn’t see all the messiness of everyday life. I would apologize for the times when my girls would interrupt our time together. I would often work my life around our meetings, making sure that I didn’t burden him with the projects or responsibilities that I had. Instead of bringing him along for the ride, I created a little bubble for him and tried to keep him in. What I learned in time was that he needed to see the messiness. He needed to watch me get interrupted by my kids and set my desires aside to care for them. He needed to come with me to help a friend move to a new home. He needed us to sweat together as we mowed lawns, cleaned a yard of sticks, and hung up drywall for his parents. He also needed us to watch TV shows and play video games together. The more he became part of the mix, the more that I saw him grow.

I often wonder if someone could be doing a better job than I am. But, think about this- “who else is doing it?” I may not be the best father in the world. I may not be the poster boy for discipline and healthy living, but I show up. I have shown up nearly every week for three years. And, I am already thinking about what graduation gift I am going to get him or how we might stay in touch when he starts living on his own! That’s called “commitment.” Commitment isn’t something that can be bought, but it is something that anyone can offer. It doesn’t take a genius, you don’t have to wear a cape, and you don’t need all your ducks in a row. I am growing myself- and he watches me do it. When I am weak in an area of my life, I tell him, and he respects me for it. When I don’t know what to say, he understands, because he knows that I care and that I will do all that I can to see him succeed in life. The more real I am with my mentee, the more influence I have on him. When I stumble, he watches me get back on my feet. When I experience the sweet taste of victory, he witnesses the benefits of hard work and perseverance.

As I wrap up my thoughts for the week, I wanted to make two last thoughts. First, being a dad, and a man, is hard. What makes it even harder for some is that they don’t have a positive male influence in the home. That’s why it is so important for fathers to seek out other men sharpen them and be sharpened by them (in my circle of peers, we use the term, “iron sharpening iron”). We build each other up to do what we are called as men to do. My second “last thought” for the week is that these lessons that I have learned about being a mentor are just as true about being a father. Fatherhood is also a thankless job sometimes, our kids need to see the messiness of our lives, and we give our kids the best of us when we stay committed to them. As I said before, I desire for every dad to be a mentor. I believe that if each man pours into a least one other person, we will see amazing things come from the future generations of fathers. We too may be better men for it.